Hemoglobin (Heme + Globin) is a heterotetramer composed of four polypeptide subunits (2 α and 2 β), each with a prosthetic heme group plus a globin chain. The heme group is formed of a heterocyclic ring, known as a porphyrin which contains an iron (Fe) atom in its center. Usually, the Fe is in the +2 redox state (ferrous) and can reversibly bind oxygen. Each Hb tetramer can bind four oxygen molecules, and 1 g of Hb can combine with 1.39 ml of oxygen (oxygen-binding capacity).

Hemoglobin is the protein contained in red blood cells that is responsible for transporting oxygen from the lungs to the tissues and facilitating the return transport of carbon dioxide. It is an essential protein for all vertebrates and exists in two forms, relaxed (oxygenated) and taut (deoxygenated). The oxygenated form has 300 times more affinity for oxygen than the deoxygenated form. The deoxygenated form promotes release or unloading of oxygen to tissue. The sigmoid shape of the oxygen equilibrium curve shows that hemoglobin exhibits positive cooperativity and negative allostery. 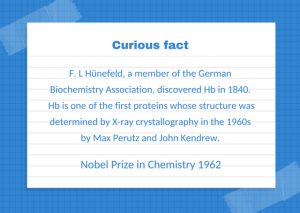 The normal ranges for hemoglobin concentration in adults are for males: 14.0-17.5 (mean 15.7) g/dL, and for females is 12.3-15.3 (mean 13.8) g/dL. When the hemoglobin or the hematocrit is below the lower limit of 2 standard deviations (-2SD) for the normal population, the patient has anemia. Hemoglobin levels above normal may be presented in patients with polycythemia. Polycythemia is characterized by an elevated absolute red blood cell mass, develops from primary or secondary causes. Primary erythrocytosis is used appropriately in the myeloproliferative disorder called polycythemia vera. Whereas, secondary polycythemia generally develops as a response to chronic hypoxia, which triggers increased production of serum erythropoietin (EPO). Secondary erythrocytosis may also be seen in increasing sensitivity to EPO. Common causes of secondary erythrocytosis include smoking, use of androgenic steroids, obstructive sleep apnea, obesity hypoventilation syndrome, and chronic obstructive pulmonary disease (COPD).

Genetic diseases of hemoglobin whose produce abnormal hemoglobins and anemia. According to the pathophysiology, they fall into three main groups:

Hemoglobinopathies are the most common monogenic diseases around the world, with at least 60, 000 severely affected individuals born every year. Hemoglobin defects are classified as endemic diseases in certain areas, particularly the Mediterranean and Middle Eastern countries. It’s estimated that around 7% of the worldwide population being carriers, and thalassemias (alpha and beta) and the sickling disorders make up the vast majority of cases.

High Yield
What is the difference between allosteric and cooperativity of hemoglobin?

Which five factors will favor the taut form of hemoglobin, and will decrease affinity for oxygen?
Cl−, H+, CO2, 2,3-BPG, and temperature

To favor oxygen unloading, in what direction is the dissociation curve shifted?
To the right

About the Author: Carolina Severiche M.D.

Carolina Severiche, M.D., is a physician, researcher, and advocate with a focus on integrating primary care and public health to help overcome the social determinants of health. Dr. Severiche studied at Universidad Pontificia Bolivariana in Medellín, Colombia, and is currently applying for a U.S. medical residency. Dr. Severiche has published research on oncology and public health in leading journals in Colombia and the United Kingdom, and has been a featured writer on KevinMD and GEMx. Dr. Severiche is currently collaborating with the Yale Vascular Medicine Outcomes (VAMOS) research group and is an Emerging Leader Fellow with the United Nations Association of the United States of America.